LINCOLN (SNR) – The reassuring image on the Shroud of Turin graces a billboard in Lincoln through The Holy Face Project.

Plans call for five more billboards in Lincoln, all featuring what is believed by many to be the face of Jesus Christ. The billboard at Old Cheney Road at 51st Street went up Monday, Feb. 15 and will remain until April 11.

The Holy Face Project silently and powerfully increases awareness of Jesus’ presence in the world by establishing roadside billboards of The Holy Face of Our Lord from the Shroud of Turin, according to the project’s mission statement.

Val Kelly of Hilton Head, S.C., saw billboards of the Shroud face in Ireland. Kelly wanted to duplicate the idea near her home and founded the project with help from her prayer group. 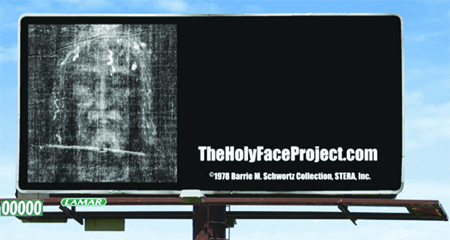 Other billboards will be up March 1 along Nebraska Highway 2 at Calvert Street; Highway 2 at 49th Street; South Street at 39th Street, O Street at 3rd; and Cornhusker Highway at 18th Street. The signs will be displayed through March 28, or longer, depending on continuing funding through The Holy Face Project.

The four locations have a combined viewership of more than 560,000 views per week, according to the billboard advertising agency… times four or more weeks they may be displayed. The images will be seen not only by Lincoln residents, but also by other Nebraskans and out-of-state travelers passing by those locations.

“I stepped out of my comfort zone to initiate this project in Lincoln and did everything I could on my part knowing that God would do the rest,” said Jim Bertrand, a member of St. Peter Parish in Lincoln. “Knowing what I do about the Shroud, The Holy Face Project seemed an opportunity to share the message of the Shroud with even more people.”

In the past six years, Bertrand has made Shroud of Turin presentations in 12 states, 18 dioceses and even in New Zealand. He taught high school science classes for 39 years before he retired in May from Pius X High School in Lincoln. He worked eight years at Crete Junior/Senior High School, 24 years at Lincoln Southeast High School and seven years at Pius. With retirement, he devotes more of his time to giving Shroud presentations.

“I got together with a wise and trusted friend who shared some names of his friends with me,” he said of the Holy Face project.

“I combined those names with people I know,” Bertrand said. “Nearly 150 people were contacted through letters, emails and other ways.”

Of those, nearly 50 contributed, he said. The Knights of Columbus, St. Peter Council No. 10510 made the largest contribution. The combined donations total nearly $7,000, but Bertrand said donations continue to come in. The billboard rates vary from $350 to $1,500 per week.

“The most significant takeaway from this experience has been a greater trust in Divine Providence,” Bertrand said. “I know little about fundraising. I learned that putting everything in God’s hands leaves one at peace, knowing that He’s the one who ultimately moves hearts.”

Lent and the Easter season just seemed like ideal times to move forward with the project, he said.

If we can put the face of Jesus in front of many thousands of people every day, Bertrand said, then the Holy Spirit can touch hearts in His own way. Even if it’s just a few seconds on a billboard, it can be an encounter with Jesus.

The photographic negative of the Shroud face shows a clarity and majesty not visible on the cloth image, according to Bertrand. He believes the Holy Spirit inspires different perspectives for different people. For some, the wounds of the Passion call to mind the suffering Jesus endured for us, and hence, His infinite love for us.

For others, he continued, it brings to mind the Resurrection. This is a great sign of hope: while we may experience our ‘Good Fridays’ at the present time, we know for certain that our ‘Easter Sunday’ is on the horizon when we step into eternity.

“I witnessed this hope dimension firsthand when I gave a Shroud presentation to women inmates at the Nebraska Correctional Facility in York,” Bertrand said. “They were so filled with hope they were beaming by the end of the talk.”

He also has heard people have returned to Church because the Holy Face beckoned them, the retired teacher said. There are as many reactions to the Holy Face as there are people. It’s a personal reaction, which he thinks is a gift, a grace from God.

Is the Shroud authentic? Bertrand said he believes it can be stated with certainty that the image is not a natural process and is not the work of an artist. Those hypotheses have been vigorously tested.

People can evaluate the objective data on the Shroud and come to their own conclusion about the question of authenticity, he said.

“The Shroud and even these billboards with the Holy Face can serve as a type of ‘sacramental,’” Bertrand said. “God can use these as conduits of grace.”

Although the billboards are not blessed, God is not limited to indoor sacramentals, he said.

Bertrand will give the Shroud presentation Thursday, Feb. 25 to students at Pius X High School. He will present to half the student body at a time in the gymnasium—to allow for social distancing. He will bring his life-size replica of the Shroud of Turin, and will spend the afternoon in theology classes, where the students can ask questions about the Shroud in a smaller, more informal setting.

For more information about seeing a Shroud presentation contact Bertrand at 402-421-7656 or besaints2@gmail.com.

(Thanks to Joe Marino for the link)

1  The author has written eight additional papers on the Shroud of Turin. Most of those papers provide exegetical analyses of specific statements within the New Testament that are likely veiled or cryptic references to the Shroud. They can be found at his website:www.theincredibleshroud.com.

2  Revision, December 25, 2020 3   “Standoff” is the word chosen by Frank Viviano who wrote a summary article on the Shroud for National Geographic. See Frank Viviano , “Why Shroud of Turin’s Secrets Continue to Elude Science,” National Geographic , April 17, 2015 at https://news.nationalgeographic.com/2015/04/150417-shroud-turin-relics- jesus-catholic-church-religion-science.html

The researcher’s supreme adulation goes to the Supernatural Reality source of ever knowledge, for those who believe, for inspiring and catalyzing this work. He thanks his able supervisor, Prof. Boniface Nwigwe, who meticulously perused through every line of this work. He is equally grateful to his second supervisor, Dr. Christian Emedolu, and his lecturers who without doubt, contributed in one way or the other to the success of this work.

He thanks the following institutions for making their libraries accessible to him; his revered unique Uniport, Capuchin Franciscan Friary Enugu, Bigard Memorial Seminary Enugu, Catholic Institute of West Africa, Port Harcourt, The Franciscans of the Immaculate, Alada, Benin Republic, and the Seat of Wisdom Seminary Ariam, Umuahia. He thanks his man, Hilary Eke, and all who assisted him with research materials as well as his adept typist, Madam Gladys Ujunwa.

He is grateful to the family of Sir and lady Jude Okeke as well as the Old Catholic Apostolic Church for their financial and moral support.

This work would have remained an unrealized possibility without the enabling atmosphere created for him by his lovely wife, Promise Nsikak Uzoma, and his promising children, Obidike Uzoma and Nwoma Uzoma. He thanks and blesses them and all who helped him to actualize this goal.

The regal science of philosophy has always battled with one enigma, “What is truth?” The urge to subject religious truths to scientific method of verification motivated a team of forty scientists in 1978, to experimentally investigate the most venerated icon of the Christian religion, and one of the most studied artifacts in human history- the Shroud of Turin – believed to be the burial cloth of Jesus. W. v. O. Quine stated that Hempel’s scientific inquiry has been overtaken by relativity doctrines but this work proposes to show that Hempel’s concept of scientific inquiry has resilient qualities that has made it resurface to be used to proffer a solution to the over century old problem in experimental science – the Shroud of Turin scientific enigma. The aim is to reappraise Hempel’s concept of scientific inquiry with the objective of resolving the conflict among Shroud scientists. This study covers Hempel’s work on ‘Scientific Inquiry: Invention and Test’, as well as the experiments on the Shroud. The theoretical framework is based on Karl Popper’s falsifiability principle. Theoretically, this work is significant because all our knowledge rests solely on truth. Practically, it is hoped to resolve the current conflict among experimental scientists over the age and authenticity of the Shroud. Hempel’s method of inquiry shall be employed to critically analyze the experimental claims by the Shroud scholars. The findings of this work are that science seldom recognizes other fields of knowledge as sources of truth, and that there is fraud in science with reference to the Shroud of Turin investigations. Based on the findings, this work recommends that science recognizes other fields of knowledge as sources of truth. It contributed to knowledge by demonstrating the importance of numismatics in empirical research.

This talk is be based around the Turin Shroud, offering a very visual aid to the sufferings of Our Lord in His Passion and Death, as well as some insights into the history and study of the Shroud.

In 2008, Pam acquired a full-sized replica of the Shroud from Barrie Schwortz, the official photographer of the 1978 STuRP scientific examination of the Shroud.  It was one of the first four replicas he created.  She was so moved by the beauty of the Shroud that she developed an exhibition around the replica. For more information about her exhibition, please click here.

On the next two episodes of Digging for Truth, we will be exploring questions about the origins and preservation of the text of the OT. To help guide us, we have Dr. Peter Gentry from The Southern Baptist Theological Seminary joining us from Louisville, KY. Dr. Gentry is an expert on the Hebrew and Greek OT. Topics include: The Dead Sea Scrolls, scribal habits, the Samaritan Pentateuch, and the Septuagint.

Bryan Windle joins us to discuss the reign of King Omri of the northern kingdom of Israel. Topics include: Tirzah, Samaria, the Moabite Stone, the Black Obelisk of Shalmaneser III, and Tiglath Pileser III.

ABR Staff Member, Bryan Windle will be joining us again for another archaeological biography. We’ll be talking about one of the longest reigning kings of Judah – King Uzziah. Topics include: the Uzziah tablet, his expansionist policy, the Sebnayau Seal, Amos’ earthquake, and more!

King Ahab ruled in Israel for 22 years. A great deal of archaeological evidence has been found connected to this wicked king. Bryan Windle will join us to talk about the Samaria ivories, the Kurkh Monolith, Jezebel’s seal, and Naboth’s vineyard.

Bryan Windle joins us to discuss the life and times of King Hezekiah. Topics of discussion include: Hezekiah’s tunnel, seals and bullae, the Siloam Inscription, Lachish, and the Taylor Prism.

True wealth is the wealth of the soul

The heavens are telling the glory of God; and the firmament proclaims His handiwork. Psalms 19:1

Collection of articles and videos on true crime and justice